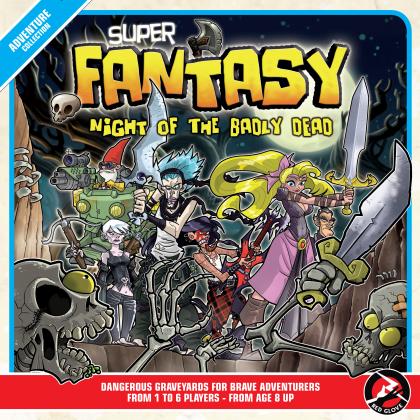 On planet Scuffland, there's a city named Grimram. It's a sad and dark place, mostly because peasants farm wild plants instead of vegetables and the local varnish seller works only with grayscale paints.&#10;&#10;On a bad, bad day, Archbishop Lazybones finds the tomb of King Skullcleaver, a great hero of the past, dead because of a sneeze that made him fall from the back of a donkey he mounted by mistake. A really bad death. After reading the story on Skullcleaver's tomb, Lazybones laughs at the king for his ridiculous fate. Skullcleaver's spirit get really angry and asks Boo, God of Bad Luck, to bring back to the upper world him and all the warriors who died badly in order to move war on the living and (hopefully) die in a better way.&#10;&#10;Boo resolves that it will be fun, and the &quot;Night of Badly Dead&quot; begins. Who will dare to stand against the army of King Skullcleaver?&#10;&#10;&bull;&bull;&bull;&#10;&#10;Super Fantasy: Night of the Badly Dead, a sequel of the acclaimed Super Fantasy: Ugly Snouts Assault, features six brand new heroes, challenging missions, loads of items, and tons of Badly Dead!&#10;&#10;Super Fantasy uses a simple yet unique dice-based system. Players have a pool of six dice to roll that they manage according to the action they want to perform (such as movement, attack, etc.) and its effectiveness. Each face of the dice shows either a 1, 2 or the Special Power symbol and the sum of the results shown represents the effectiveness of the action performed by the heroes. Every time the Special Power symbol occurs, the hero can choose to charge one of his abilities; once fully charged, the hero can unleash its power against the enemies!&#10;&#10;Are you ready for the biggest adventure of all times?&#10;&#10;