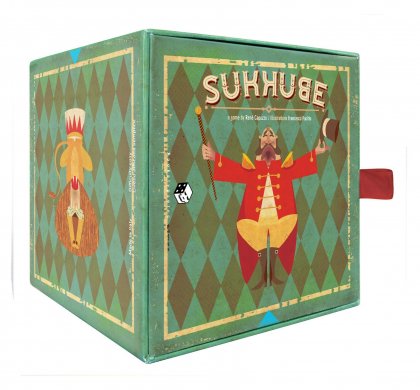 Sukkube is an abstract game in which each player represents a character of the circus: The Tamer, the Lion, the Presenter, the Clown, the Strong Man, and the Dancer. If fewer than six players are in the game, assign the remaining positions to the &quot;bots&quot;, which will play automatically.&#10;&#10;They are distributed, discoveries, five cards to each character.&#10;The cards are played according to the rules.&#10;These cards allow to rotate the cube, which is nothing other than the box itself of the game.&#10;&#10;When any character ends his cards, or can not play any according to the rules, the round ends and the character on the upper face of the cube (the Dominator) earns a point. You rotate the cube of 180 degrees and the character that was at the bottom end of the previous round (the Sukkube) is the first to play in the new run. First player to reach 5 points Wins.&#10;&#10;The game will test the predictive power of the players, having played all cards on the table.&#10;&#10;Seven play variants let you experience different moods.&#10;&#10;