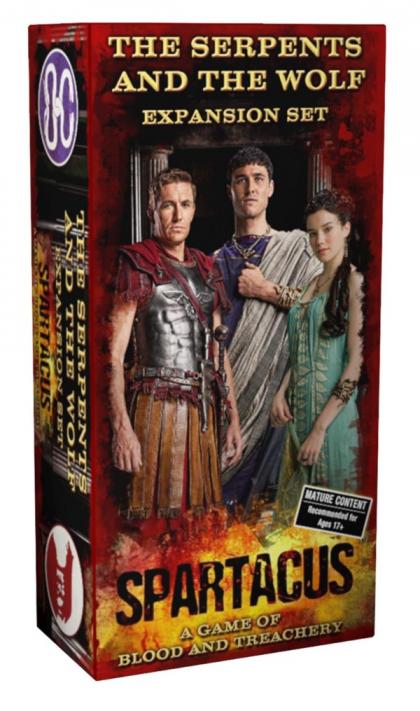 Spartacus: The Serpents and the Wolf Expansion Set

Spartacus: The Serpents and the Wolf expands Gale Force Nine's Spartacus: A Game of Blood and Treachery with two new Houses, and adds new cunning Schemes, deadly Gladiators, and the vicious spectacle of team combat in the arena during the Primus!

Two new Houses – the respected praetor, Varinius and the arrogant noble, Seppius – dramatically change the game's Intrigues. Varinius imposes his will on the noble Houses, while the meddling Seppius twists the plots of others to his own nefarious ends. Shrewd new Schemes and frantic Reactions will cause more treacherous assaults and desperate alliances between the Houses than ever before!

Houses bid for new Slaves who add to the fortunes of their Dominus with new skills and talents. Combatants learn new brutal fighting techniques as new weapons and armor become available. Powerful new Gladiators stand among the other champions of Capua, ready to make their mark in the arena and earn glory and Influence for their Dominus.

Teams of Gladiators battle each other in a grand spectacle of blood and strategy with the addition of the Primus. Two Gladiators are matched against another team of two. Bitter rivals may find themselves fighting side-by-side, seeking favor and reward during these brutal contests. While most Gladiators battle with honor and purpose, beware treacherous fighters who many turn on their teammate when the opportunity arises!

Spartacus: The Serpents and the Wolf adds more bloodshed and betrayal to the game in the spirit of the groundbreaking STARZ Original Series.

Voti e commenti per Spartacus: The Serpents and the Wolf Expansion Set