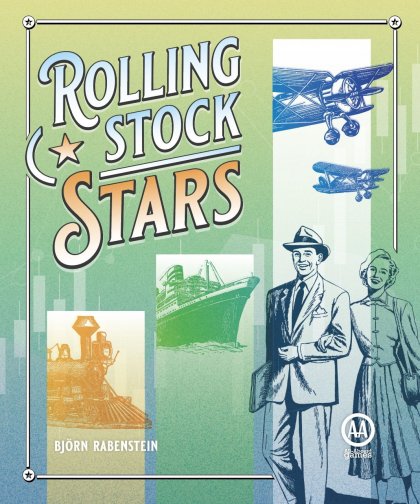 Rolling Stock Stars is a reimplementation of Rolling Stock. &#10;&#10; Shorter game (no purple companies)&#10; Companies have variable powers / # of shares&#10; Green and blue companies are less powerful&#10; Players can sell corporations into receivership&#10; Corporation valuation is abstracted away with stars&#10;&#10;&#10;&#10;&#10;Do you love 18xx games, but wish there was one with a shorter play time, a more realistic and sophisticated stock market, partnerships, and more math? Then look no further! Rolling Stock Stars is an 18xx inspired card game that&rsquo;s for financiers who want to take it to the next level - it&rsquo;s a pure financial game with no map. Missing an auction by just one dollar can spiral your corporation into bankruptcy or lead to a hostile takeover.&#10;&#10;In Rolling Stock Stars, players represent investors who purchase companies through auctions and later convert them to corporations. Subsidiary companies in corporations synergize with each other, bringing in more income. Additionally, each corporation has a unique power that allows you to explore a wide array of strategies. The game runs through transportation history starting from the early Prussian Railroads in the 1830s and eventually ending with airports.&#10;&#10;In order to stand the test of time, you&rsquo;ll need to manage your corporations with brutal efficiency. Make deals, plan multiple turns ahead, and account for every coin in Rolling Stock Stars!&#10;&#10;&mdash;description from the publisher&#10;&#10;