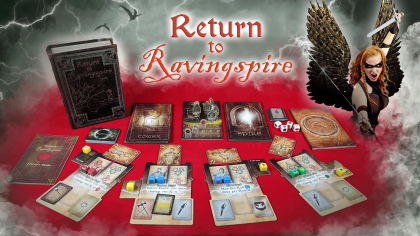 In the far future, an accident aboard the orbital research vessel Chronomega-1 causes the station to slice backward through the fabric of space-time, leaving loose threads in its wake. As the maelstrom fades and the threads pull together, knots are formed...&#10;&#10;The haunted Tower of Ravingspire sits upon a prime nexus of this entropy, and its immortal lord has haunted the peoples of the Vorpal Realm for generations. The Dark Lord of the Tower was defeated long ago, but time doesn&rsquo;t work like it should in the Tower, and those who should have succumbed to mortality&hellip; have come back.&#10;&#10;Return to Ravingspire is a cooperative questing game for 1-4 players. Take on the roles of Heroes climbing the ever-shifting Tower to the Spire and face its Dark Master. But beware! For the Tower lies upon a nexus of space-time, and its portals may as easily lead to other dimensions as they will up the Tower.&#10;&#10;&mdash;description from the publisher&#10;&#10;