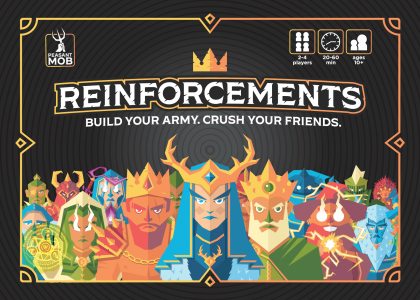 Build your army. Crush your friends.&#10;&#10;REINFORCEMENTS combines fun and simplicity with elements of strategy and planning. Build up your army to unlock more actions and summon the mythical totems that embody the kingdoms of the realm. Barrage your foes, Fortify your army, or Adapt to the situation at hand. Every move matters as you try to be the last Kingdom standing. Do you have what it takes? Inspired by the classic card game War.&#10;&#10;In the game you will be starting with a handful of five cards and three face-down Foundations (selected during setup). On your turn, you can do one of three things: use a card in your hand to Attack the lead card in one of your opponents &quot;stacks&quot;, Defend your foundations by adding a card that matches the suit of that foundation from your hand to the &quot;stack&quot;, or Discard as many cards from your hand as you want (you will fill back up to begin your next turn.)&#10;&#10;Once you add a third card to a stack, that stack is turned face up and you draw a card from the top of the draw pile to start a new foundation. Having a faceup stack will give you a bonus depending on the suit. A faceup stack of Blue cards allows you to Fortify which lets you take an additional Defend action on your turn if you have a blue card in hand that you can place. A faceup stack of Red cards allows you to Barrage your opponent by allowing you and additional attack on your opponent each turn if you have a red card in hand. Finally, a faceup Green stack gives you the ability to Adapt by either swapping a green card from your hand with a green card from the stack or swapping the position of two of the green cards in your faceup stack.&#10;&#10;Each color of stack that is face up grants you these abilities, so they can add up quickly and each color that's face up also gives you a passive ability: blue - your blue stacks may now have 4 cards instead of just 3, red - red cards that attack or Barrage automatically win all ties, green - your hand size increases by 1 for every faceup green stack in your army. Cards range in value from 1-7 and it's a basic war mechanic that higher card beats lower card, however if you win a battle (i.e. your six beats your opponents' two) any extra points carry on to the next card in the line (in the example you would have four points left to face whatever card was next in line.)&#10;&#10;If there is a tie both players yell &ldquo;REINFORCEMENTS!!!&rdquo; Each player MUST yell this when a tie occurs. This rule is non negotiable. Players draw the top card off of the draw pile and flip them until the battle is resolved. There are also some special cards that truly mess things up (Assassins, Mages, and mobs of Peasants) and if you flip two stacks of one color or one stack of each color (three stacks in total) one of the Totems will visit you and provide a special power. But you have to use it before an opponent completes their requirement and steals the Totem from you.&#10;&#10;