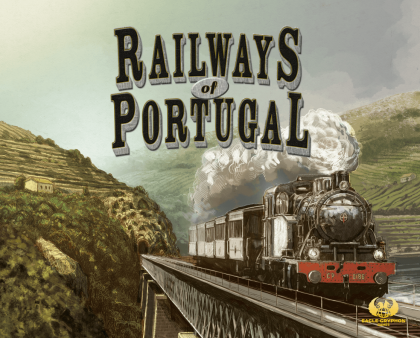 Railways of Portugal expands the Railways of the World series with a new map of Portugal designed by Vital Lacerda (The Gallerist, Lisboa, etc.).&#10;&#10;You plan and lay track, upgrade your trains, sell goods to other cities, and use operation cards to become the richest in Portugal! Balance your budget wisely, since taking too many bank bonds can ruin your business over the course of the game.&#10;&#10;Foreseeing your competitors moves and making well thought out moves for yourself will ensure you an undisputed railroad empire!&#10;&#10;Highlights of the new additions to the game:&#10;&#10;&#10; Islands off-shore which receive more goods as the game goes on, but require more money to access via Maritime Connections&#10; No black cities on the board, they can only be added at the start of the Industrial Age and via Urbanization&#10; A &quot;tight&quot; map (close cities) that demands careful and tough decisions which lead to significant player interaction&#10; Major Lines that require intermediate connections&#10; New Operations cards and concepts including: Government Subsidies, State Treasury Shares, Maritime State Support &amp; Public-Private Partnerships&#10; Goal Cards instead of Baron Cards&#10;&#10;&#10;&mdash;description from the publisher&#10;&#10;