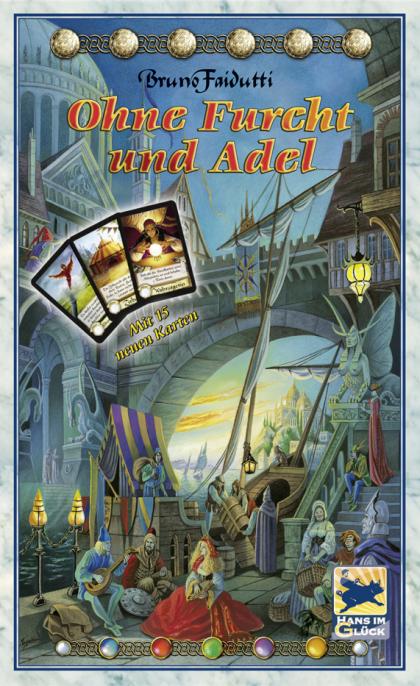 In Ohne Furcht und Adel, players take on new roles each round to represent characters they hire in order to help them acquire gold and erect buildings. The game ends at the close of a round in which a player erects her eighth building. Players then tally their points, and the player with the highest score wins.

Players start with a number of building cards in their hand; buildings come in five colors, with the purple buildings typically having a special ability and the other colored buildings providing a benefit when you play particular characters. At the start of each round, each player secretly chooses one of the eight characters. Each character has a special ability, and the usefulness of any character depends upon your situation, and that of your opponents. The characters then carry out their actions in numerical order: the assassin eliminating another character for the round, the thief stealing all gold from another character, the wizard swapping building cards with another player, the warlord optionally destroys a building in play, and so on.

On a turn, a player can either earn gold or draw two building cards and discard one, then optionally construct one building (or up to three if playing the architect this round). Erecting buildings costs gold. At the end of the game, each building is worth a certain number of points. In addition to points from buildings, at the end of the game a player scores bonus points for having eight buildings or buildings of all five colors.

The 2012 release of Ohne Furcht und Adel includes fifteen cards not included in the original base game, with seven different types of action cards. These cards are mixed into the building card deck, and one action can be played each turn. Action cards in hand are worth one point at the end of the game. The cards, their actions and their counts are:

(x2) Wahrsagerin (Fortune Teller) – Look at an opponent's hand and take one of their cards.
(x2) Direktor (Director) – Build up to two more buildings this turn.
(x2) Rasputin – Negate an assassination.
(x1) Akrobatin (Acrobat) – If there is no king this round, take the crown.
(x3) Kassenwagen (Ticket Booth) – Once per turn, the active player may place one gold on this card to draw two cards and keep one. You may trash this card to gain all gold on it.
(x2) Lebende Kanonenkugel (Living Cannonball) – Replace one of your buildings with a more expensive one from your hand, paying the difference.
(x3) Zirkuszelt (Circus Tent) – You may build this, which counts as a zero point building without color that the Warlord cannot destroy.