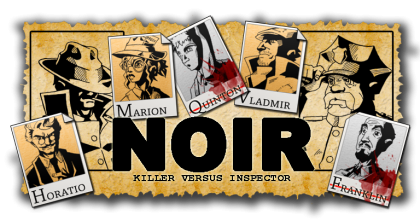 NOIR: Killer vs. Inspector is a two-player game of hidden identities and deduction. Each player receives a secret identity from among 25 suspects and an open role that determines his available moves and victory conditions.

The Killer plays by eliminating players, focusing more on intuition and reading his opponent. The Inspector uses secret information and his ability to accuse suspects to create a play style more focused around logical elimination of possibilities.

The game plays in 5 to 15 minutes, and is contained in a 54-card deck box for easy travel play.