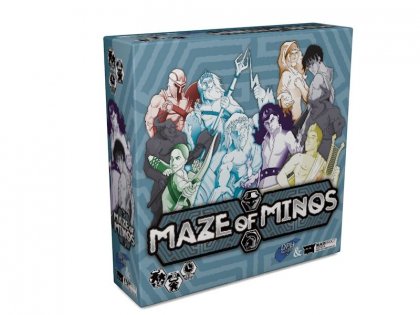 Can your Hero solve the ever shifting Maze of Minos? &#10;In ancient times, the legendary artificer, Daedalus, built an elaborate and confusing structure for King Minos of Crete. Daedalus had so cunningly designed the Maze that he barely escaped its ever shifting walls after building it, so he left a secret trail of stars to mark the way out.&#10;&#10;Every season, King Minos would imprison several Heroes within the Maze to be hunted by the Minotaurs and beasts within. With aid from the gods, your Hero will race through the Maze of Minos, avoiding the Minotaurs, to discover three stars of Victory to win.&#10;&#10;Maze of Minos is a turn based strategy board game with two phases of play: the maze construction phase and the maze escape phase. During maze construction each player will place tiles and walls, in turn, to challenge the other players during the escape phase. During the escape phase the players will utilize the abilities of the Gods through cards to navigate the maze, avoid Minotaurs and collect Victory Stars. The Game is won when a single player discovers three stars belonging to other players. The game is for two to six players.&#10;&#10;