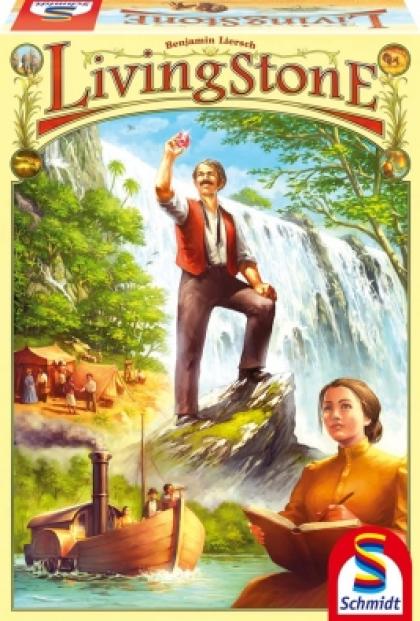 The Scottish missionary, Dr Livingstone, has been researching African tribes and the flora and fauna of the area. As part of the Livingston Exploration, strategically set up tents in various regions while collecting gems found along the Zambezi River bank. Gain the most victory points and the favor of Queen Victoria to win!

From the publisher: In this game you follow in the footsteps of David Livingstone to the roaring Victoria Falls. On your way you may want to try your luck in the Diamond mining or you may prefer to seek a more calculable risk.

The publisher promises an exciting and tactical family game, with a completely new dice mechanism.

In Livingstone, the players travel through the river Zambezi and score points by making explorations to inland and finding valuable diamonds.

At the start of each round, players roll dice (2 per player), which determine where or in which quantity the actions the players take in the round will happen. Starting with the starting player for the current turn, the players pick dice (and take actions) clockwise one at a time. This is done until all the dice are distributed or nobody can pick another die; you can only ever pick a die that has a higher face value than the previous die you picked.

When picking a die, players can choose between four actions:

Additionally, the players can do the following actions at any time of their turn for free:

Sell diamonds for money
Contribute coins to the Queen; you have to inform other players you are doing this, but you do not have to specify the value - coins are stored in a chest in secret

At the end of the turn, the boat is advanced (one column) further in the Zambezi river. The game ends when the boat cannot advance (eg. it has reached the last row).

At the end of each turn, the current column is scored; each tent in a row scores the row amount (die/row value = amount of points)
At the end of the game, each row is scored; the player with the majority of tents in each row scores points (lower die/row numbers score more points)

The player who has contributed the least amount of money to the Queen cannot win the game, even if they collected the most points.