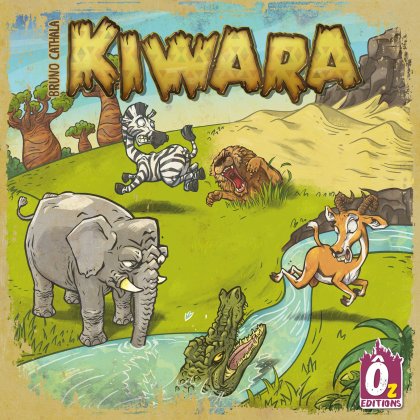 In Kiwara, two groups of animals compete for space in the savanna, claiming points when they dominate a territory, but the value of a space depends on who's in it!&#10;&#10;The game board features six territories &mdash; two each of three, five, and seven spaces &mdash; with rivers dividing all of the territories. Each player has fifteen animals tokens in their color. One player places the totem on a space outside the 6x5 board, then players alternate taking turns. On a turn, a player:&#10;&#10;&bull; Places one of their animal tokens in an empty space in the row or column adjacent to the totem.&#10;&bull; Moves the totem 1-3 spaces clockwise. (If all spaces in these rows or columns are full, the player moves the totem to the first row with an empty space.)&#10;&#10;If a lion is placed orthogonally adjacent to zebras or gazelles, then the zebras are turned face down (yum!) while the gazelles are returned to their owners. If a player must place a zebra or gazelle adjacent to a lion, these tokens are placed face down.&#10;&#10;If you place a crocodile across the river from a gazelle, you can exchange these tokens. (The crocodile attacks, and the gazelle bounds to safety.) You can swap the location of a crocodile many times this way.&#10;&#10;Whoever places the token that fills the first savanna claims the Okapi card, which is worth 5 points at game's end. Once the board is filled, determine who has the most tokens in each territory; face-down tokens are counted to determine majority. Whoever wins a territory scores points equal to the value of all face-up animals in this territory: zebras 6, gazelles 2, elephants 5, lions 1, and crocodiles 0. Whoever has the most points wins!&#10;&#10;While the base game of Kiwara is the same as the earlier Dr&ocirc;les de Z&egrave;bres, the game includes a double-sided game board. If you use the &quot;free play&quot; side of the board, to set up you use the river sticks included to create six territories of sizes 3, 5, 7 or 9, thereby creating a fresh layout for each game.&#10;&#10;Instead of using the Okapi, you can shuffle the ten-card reinforcement deck and give the player who completes the first savanna a random card; the player can use the bonus action on this card at any point during the game. With players of differing skills, the more inexperienced player can start with a card or two at random to level the odds.&#10;&#10;