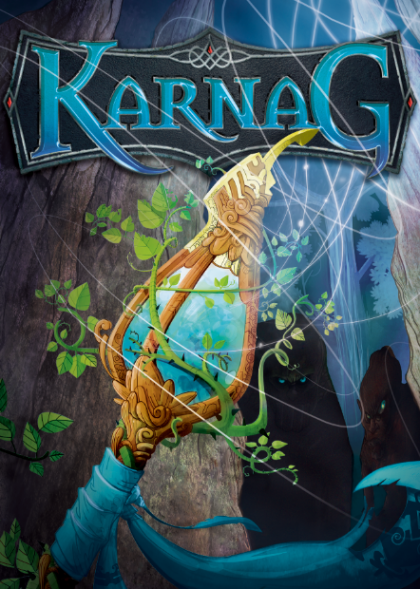 AIM OF THE GAME

In turn, the players place all elements of the game area (wall ruins, swamps).
Four creatures are introduced in the game and will progress from the door (in the centre of a glade) towards either side of the game board (representing the druids’ path surrounding the glade). Creatures’ moves are pre-defined and happen automatically.
The players place their team of three druids whose role is to prevent the creatures from invading the human world.
Energy markers are set at the start level and the knowledge track markers are set under the tracks.
The pile of Power cards is shuffled and placed near the board.

The game consists of a defined number of rounds (depending on number of players). Every round is composed of the following phases:

The creatures progress. The creatures already on the board progress towards the side of the board using a totally automatic way of moving. New creatures (1 to 3, depending on a dice roll) arrive on the board and start to progress too.
Preparation of the Action tiles. The six Action tiles are shuffled and placed one by one forming a line, face up. These tiles represent all possible actions, each tile being separated into a major and a minor action. The number of places available on the tiles depends on the number of players.
Choice of actions. Each druid team carries out 5 actions a round, represented by Action markers. Players, in the reverse order of their position on the score track, choose their actions one by one by setting their Action markers on the available places on the Action cards. Actions can be: moving the druids (they only move on the path surrounding the glade), setting a magical stone (a magical stone is set at the intersection of the magical beams emitted by two druids looking at the glade, this costs energy; the magical beams do not cross obstacles), capturing creature(s) (a druid may capture a creature in front of him with his magical beam; this costs energy but gives MP and sometimes special properties), progressing in knowledge tracks (to increase the capacity of moving, or to increase the influence at the druid council, for ­instance), preparing magical beverages (to increase knowledge but also to recover energy), moving a magical stone (it is possible to move a magical stone), acquiring Power cards (they give special powers, such as allowing the magical beam to pass through a wall), and influencing a creature (allows to move a creature).
Actions are performed. Actions are performed marker by marker, from left to right, starting with the major actions before doing the minor ones. If the same colour of marker is encountered a second time on the same action, this action is not carried out. The actions on the next Action tile are then carried out and so on, until all major or all minor actions have been performed. Then, the players come back to the stopped action to perform it. Druids must inform the council about all their actions. After they have set a stone, captured a creature, or prepared a magical beverage, druids are placed at the druid council. Any druid can start from the council to enter back the path, but he can also stay at the council to influence it and gain MP at the end of the round.
Activation of magical stones. At the end of each round, all stones that are aligned and of the same colour automatically become menhirs. MP are attributed to the corresponding players and depend on the distance between the stones that have been transformed, as well as their position in the glade. Menhirs have a special property that will be activated at the end of the game.
Druid council. At the end of each round, the influence of each druid team on the council is evaluated. Players receive as many MP as their number of druids at the council. In addition, the team in majority can increase his knowledge in one of the knowledge tracks.

Then, a new round can start.

END OF THE GAME

The winner is the player with the highest MP score.