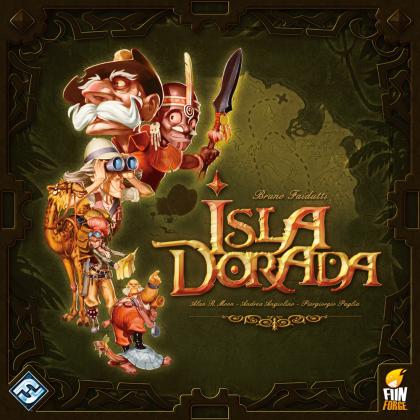 In the middle of the 1930s, an expedition of treasure hunters crashes its zeppelin in the middle of an unknown and mysterious island where legends tell that several old and powerful civilizations have left many sumptuous treasures.

Each player is one of these brave explorers who joined the expedition with old maps giving clues on where some of these treasures can be found. However, it is clear that the land is barely known and dangerous, so, all explorers decide to travel together, in one solid group by hiring beasts of burden and exotic items in the native villages while trying to avoid the many dangers of the inhospitable land of Isla Dorada...

Which one of these brave explorers will find the most valuable treasures, avoid the numerous curses and accomplish it's rewarding destiny?

In Isla Dorada, players will have to move a unique pawn portraying the expedition of explorers. Each player will collect cards of different kinds (movements, actions, destinations, curses, destinies, bonus or malus cards) and will have to build the best hands turn after turn (time is limited to a certain number of game turns) to be able to chose the expedition destinations in a succession of bids and negotiations. Doing so, the players will try to put their hands on treasures while avoiding their cursed destinations and trying to block other player's objectives.

The very easy rules can be learned in a few minutes whilst the rich and elegant game play assure an always renewed experience.