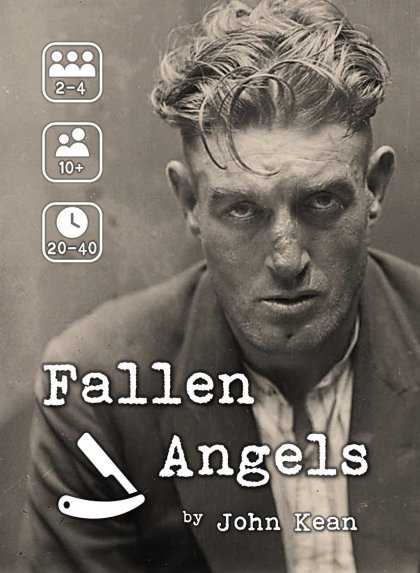 Sydney Australia in the 1920s is rife with sly grog, prostitution, cocaine, theft and fraud. Razor-wielding gangsters rule the streets, presided over by rival crime queens Tilly Devine and Kate Leigh.&#10;&#10;But you, the police, have not been idle. The holding cells are overflowing and now you must work as a team to bring together the evidence needed to convict each suspect. Take care - just one slip means a criminal walks free...&#10;&#10;Fallen Angels is a unique deduction game. Each card features two of six possible evidence icons on one side, but only one of those two on the reverse side. Each player fans their cards so that they can see one set of icons but the other players see the other set. On their turn, a player selects one card and the other players arrange their hands to indicate which of their own cards feature the icons that they can see on the back of that card. The player must then deduce what icon or icons are on the reverse of their card, taking into account that what they see in other players' hands is not exactly what those players themselves can see. If they deduce correctly then the evidence may be enough to convict a suspect. But if they guess wrong then that suspect is acquitted. To win the game, players must together convict ten suspects without acquitting too many.&#10;&#10;The cards feature historical mugshots of real suspects arrested in Sydney, Australia, during the 1920s razor gang era.&#10;&#10;