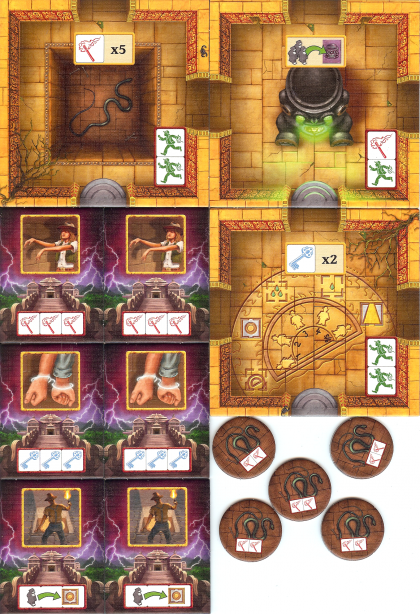 Escape: The Curse of the Temple – Quest Chambers

Chaos Chamber - All adventurers must be in this chamber at the same time and draw 1 curse each to complete this task.

Snake Pit - The player who discovers the snake pit takes 1 snake token for every other adventurer and adds them to each of their chambers. First all token snakes must be defeated with 2 torches while in the same chamber as the token. After that has been completed, players must defeat the mother snake in the chamber using 5 torches to complete this task.

Mind Control - You are not allowed to touch your adventurer figure, the draw pile, or gems on the depot. Other players must move them for you.

Pitfall - Immediately place your adventurer figure back in the starting chamber. Then discard this curse.

Magical Bond - You must have 1 hand touching another player at all times.