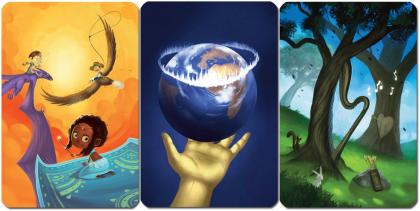 The 2012 Asmodee Special Card set is a set of 3 cards that can be added to any Dixit game simply by shuffling them into the deck before the game. The three cards are:

An aerial scene depicting a knight on a purple dragon, a cowboy on a giant eagle, and a gypsy on a flying carpet. You might recognize this illustration, as it was used as the box cover of Dixit 3!
An image of earth with a halo of fire (or maybe smoke or something else?) surrounding it. There is also a giant hand palm-side up beneath the earth.
A forest scene, where a harp is built into one of the trees and plays a song. Someone has also carved a heart into one of the trees and shot it with an arrow.