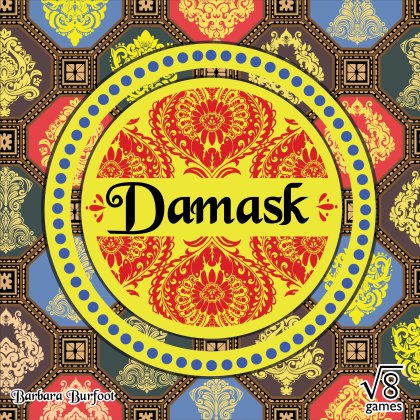 From the great trading center of Damascus, via the Silk Road, ancient weaving techniques and motifs made their way to the famous textile houses of Venice. Master weavers used draw looms to create richly woven fabrics that became known as damasks. For centuries, these luxurious silks lavished the wardrobes and halls of mansions and palaces across Europe.&#10;&#10;In Damask, players play the roles of these master weavers, trying to make the most money, while also gaining the favor of the Weavers' Guild. In more detail, the game includes 72 damask cards, with the damasks being two of six colors and one of four patterns; place 26 cubes (which come in six colors) at random on the spinning wheel, lay out a pattern and color card at random for each &quot;season&quot; that the game will be played (two in a short game, three in a normal one), then lay out six damask cards at random. Each player drafts a damask card, then you refill the display.&#10;&#10;On a turn, either you take a damask card and place it in front of you, or you draft cubes from the spinning wheel by choosing a cube, then going clockwise or counter-clockwise until you hit the second cube of any color. Collect all of those cubes, placing them on damask cards as you wish and keeping the remainder in your overstock. Each damask card requires three cubes of one color and two of another to complete. After the required action, you can take one of two optional actions: Take all cubes of one color from an opponent's overstock (with them receiving a guild favor in compensation), or mount a damask by returning the five cubes on it and standing it in your personal holder. You earn 1 coin when mounting a damask and 1 additional coin for each color or pattern it has that matches the previous damask you mounted, i.e., at most 4 coins.&#10;&#10;If a mounted damask also matches the season's color or pattern, you gain guild favors. Each guild favor has a color or pattern on it, and you can use them to mount damasks in place of missing cubes, replace damask cards available in the display, mount an additional damask, or avoid paying taxes for extraneous cubes left in your supply at the end of a season. Three guild favors are worth 1 coin at game's end, and in addition to coins earned during the game, you receive bonus coins at game's end for having all six colors or all four patterns among your mounted damasks. Whoever earns the most coins wins.&#10;&#10;