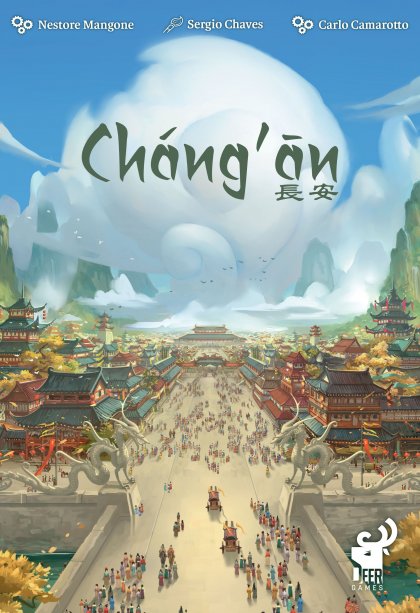 During the Tang dynasty, Chang'an was one of the largest cities in the world. It was a cosmopolitan urban center with thousands of travelers exploring it. As an important urbanist, compete against other players to build the best districts of Chang'an and to get the favors of the court.&#10;&#10;Players will carefully project their plans by placing cards on the top part of their personal boards (the gates). Then they will move them into the city districts to build amazing buildings and to welcome influential characters in the neighborhood. Every new card built into the districts will provide players with different types of privileges and a certain number of victory points.&#10;&#10;During your turn, you perform only one of the three main actions: research, play and/or move cards on the gates to produce resources and activate character effects, or build.&#10;&#10;The game ends as soon as a player gets nine or more cards built in the districts of their City board (cards at the gates are not considered).&#10;&#10;The player with the most victory points will be declared the best urbanist of Chang&rsquo;an.&#10;&#10;