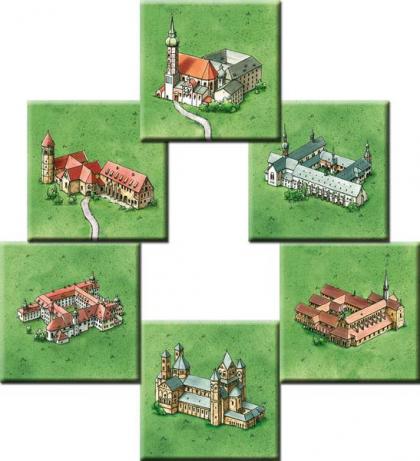 Carcassonne: Die Klöster, a mini-expansion first published for Easter 2014, lets you replace the monastery tiles in the Carcassonne base game with six new tiles, each with an illustration based on a particular German monastery: Kloster Andechs, Eberbach, Lorch, Kloster Maria Laach, Kloster Marienthal, and Maulbronn.

When you place a tile from Die Klöster, you can place a monk on the tile as usual (with the figure being scored and removed only when the monastery tile is surrounded by eight other tiles) or you can lay the figure on its side to indicate its status as abbot; abbots remain in place until the end of the game, then they score one point for the monastery itself and for each tile connected to the monastery in rows and columns leading away from it.

Carcassonne: Die Klöster is part of the Carcassonne series.