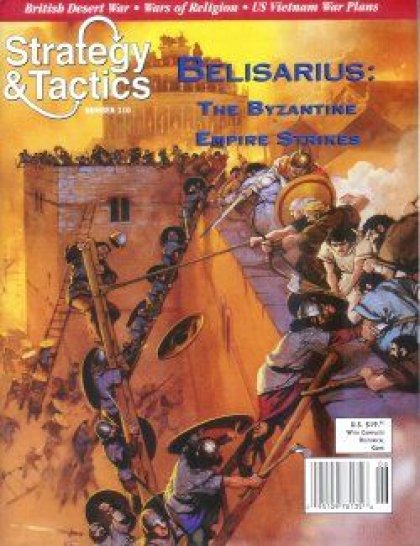 Belisarius is a wargame simulating the era of the Byzantine or Eastern Roman Emperor Justinian (527-564 AD), in which one of his generals, Belisarius, rose to prominence. Justinian&rsquo;s reign saw the Byzantines reconquer much of the West from the barbarians who had precipitated the Fall of Rome in the prior century.&#10;&#10;Belisarius is a two player game. The Empire player controls the forces of the Byzantine Empire and its allies. The Barbarian player controls various barbarian and insurgent forces, as well as the Persian Empire. Each player&rsquo;s forces are represented by military units and Stratagem markers. Players must use a combination of military strength and cunning strategy to maintain and increase their power.&#10;&#10;The Belisarius rules are based on the Charlemagne (S&amp;T #189) and Xenophon (S&amp;T #203) games. The system was later used in Khan (S&amp;T #229).&#10;&#10;