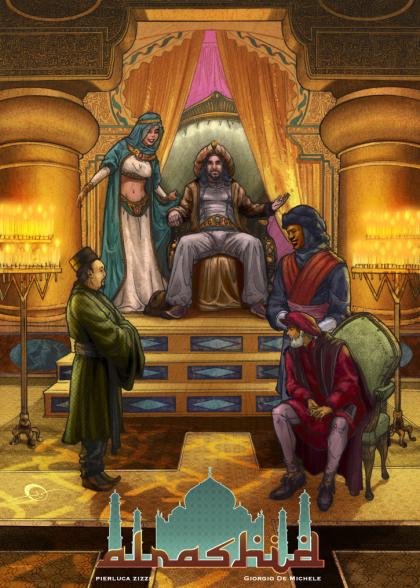 Harun al-Rashid was the fifth Great Caliph of the Abbasid Dinasty, and he ruled over the Middle East between the years 786 and 809. His reign was full of prosperity in all areas, like culture, science and politics. His life and his famous court are said to be the ispiration for the "One Thousand and One Nights" collection of folk stories.

In Al Rashid, players will take the role of the heads of powerful families, and will use the members of their families for trading, travelling, and ultimately trying to exercise influence over the court of the powerful ruler.

Al Rashid is a mostly deterministic strategy game – with a slight hint of randomness – based on worker placement, influence, resource management, and the efficient scoring of prestige points (PPs). As heads of families, players will have three different worker types at their disposal: the Sage, the Merchant and the Pasha. The three different types of workers, each with a different influence value, can be placed on the map of ancient Middle East to gain resources, or can be placed on the corporations to get more workers, or on government and imperial offices. The corporations represent several powers at the court of the Caliph: Intrigue, War, Science, Commerce, and Politics.

The game takes place over five turns, with turns split into two main phases: the placement phase and the resolution phase. Each phase is split in several rounds. During the placement phase players take turns placing their workers on the board. During the resolution phase they take turns deciding which action will be resolved. Each action, either a zone on the map or a corporation, can hold workers from all of the five players, but only the top three players, identified by influence and placement order will get to resolve the move. During placement workers can be added to the same areas to improve a players's influence. Players with higher influence will get a bigger and better effect out of the action they are resolving.

Resolving geographical areas will give a player resources. The resources come in five flavors: Wood, Pottery, Metal, Spice and Silk, and they can be used in trades. The dominating player – that is, the one with more influence, or in case of a tie, the one who placed first – will get three different resources, or all of the resources of one type (resources are distributed unevenly on the map), the second player will get two different resources and the third player just one.

The resources gained by resolving geographical areas can be used in the corporations to buy more workers or get government offices. Government offices work more or less like buildings in other placement games. Some give permanent advantages, some have a one-shot effect, and some can be used every turn. As for the geographical areas, having more influence will be advantageous, and dominating players will get cheaper workers or better effects out of the corporations.

The game contains no currency, so players will need to be careful when they combine resources to get money because if they pay more than they should, no change will be returned.

Every turn raiders will spontaneously appear on random locations on the map, so players will need to use some of their actions to hire mercenaries that can be used to combat the raiders and give them access to resources. Players accumulate PPs when they buy offices and workers, and at the end of the fifth turn the player with more PPs is declared the winner.